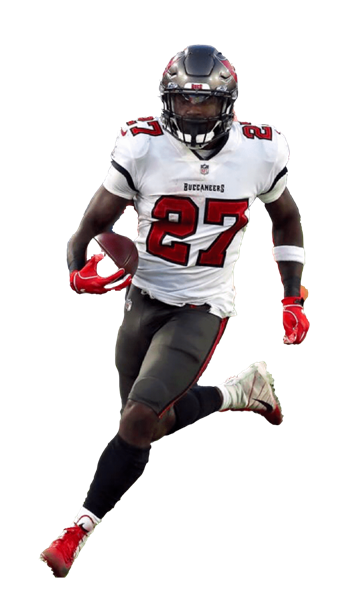 Pre-season is behind us and we’re officially into draft-season! We’ve shown you how to use the cheat sheet to prepare, how to use it during your draft, what a successful draft looks like, some undervalued players, and, now, it’s time for our pick of the year.

Running back stands out this year as a place to find some value, so we’re focusing there.

We looked at 2020 rushing grades, 2021 projected offensive-line ranks, and ADP to identify RBs who have outsized potential compared to their average draft position. We’ve sorted all fantasy-relevant RBs with a positive ‘Upside Score’ in the table below.

Giovani Bernard looks promising, but only a top-35 rushing grade. Perhaps our PPR pick of the year.

We can skip Latavius Murray because of Alvin Kamara’s presence and the uncertainty (or certainty) around the Saints QB play.

We can skip Kenyan Drake because of Josh Jacobs. He may get involved, but the presence of each hurts the other.

We see question marks with a lot of the other players. Either split-backfields, offensive lines worse than we’d like to consider, or just generally terrible situations. Hello Phillip Lindsay.

Kareem Hunt looks promising, but Nick Chubb keeps him from topping our list.

Some others like James Robinson and Jonathan Taylor have solid ‘Potential Scores’ – the mix of rushing grade and offensive-line rank – but are already being drafted appropriately, so they’re off our list.

So we’re back to Ronald Jones. His ‘Upside Score’ isn’t as high as Giovani Bernard, but his rushing grade is quite a bit higher and he’s the likely starter in Tampa Bay. Tampa Bay has a highly rated offensive line, so we could see Jones spring a lot of long runs, moving the chains himself, limiting 3rd-down opportunities for Bernard. Of course, if that doesn’t happen, Giovani Bernard could turn into James White and turn into the pick of the year. But Ronald Jones it is!

Now, is that scary? Sure. Fournette came on during the playoffs last year and could steal a lot of work from Jones. Bernard could be leaned on heavily. Ke’Shawn Vaughn, who performed well with limited carries, could even make a mark. All of that could certainly happen, but the price is right and the talent is there.

ROJO is our YOLO pick of the year. Here’s to hoping he doesn’t fumble it away!