Kickers and Defenses and Clowns, Oh My! 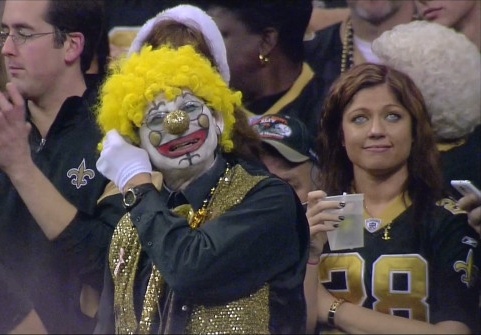 We’ve all participated in clowning the first person to draft a K or DEF, but maybe we’re the clowns…

The standard wisdom is don’t draft a K or DEF until the last two rounds, but are there exceptions to this rule? After all, a fantasy point is a fantasy point is a fantasy point whether it comes from a RB or a WR or a K. As you know, we don’t care how many points a player scores, we only care how many more points he scores than the average player. Put another way, if your RB scores 2 points more than your opponent’s RB and your K scores 2 points more than your opponent’s K then your RB and K are equally valuable (that week).

Let’s look at Stephen Gostkowski’s results from 2009 to 2015 and see where his final rank among K’s was.

So what does this tell us? That person who reached to draft Stephen Gostkowski might not be a clown after all… depending on how far they reached. Pretty impressive. Outside of finishing 13th in 2010, Gostkowski finished as the 1st or 2nd best kicker 6 out of 7 years! But what about 2016?? Well, he fell to 9th. But 6 out of 8 is still pretty good! After four years as the top K, I’d say we can forgive a lowly 9th place finish. After all, some RB’s and WR’s fall off after a good year as well (hello Todd Gurley and Allen Robinson!) After Gostkowski, the next few K spots show some consistency, but not nearly as much, then it declines pretty rapidly.

There are a lot of other factors to consider like week-to-week consistency, upside potential, points for long field goals, and on and on, but we can generally say that we would advocate “reaching” for a *top* K if one critical condition exists… you believe the other players you want to draft will still be available for your last pick. For example, if you want Rex Burkhead and Josh Docston as your sleepers, you can probably get them in the last two rounds. If you believe that to be true, then you might as well grab a top K or DEF a couple rounds early because you can still get your sleepers later. If you’re weak at a position, though, like RB or WR, don’t play around! Keep grabbing bench depth with high upside, because if one of those players hits (Doug Baldwin or Devonta Freeman a few years ago or Will Fuller last year) that player’s value will more than trump the top K’s value. If you’re confident in your starting RB and WR though, feel free to jump up a round or two and draft a K or DEF that you feel strongly about. After all, value comes from getting the top players at a position, even if that position is K or DEF.

Our Ranks vs ADP

What did we learn last year?

How to Maximize Your Post-Draft Time

Kyle Shanahan says he expects 49ers' Jimmy Garoppolo to most likely be traded, but it's 'not a guarantee'
San Francisco drafted Trey Lance No. 3 overall in 2021
(May 24 -- CBS Sports)

Patriots Talk: Is an audition for offensive coordinator still going on?
Tom Curran and Phil Perry break down what we've learned about the Patriots' offensive coaching plans.
(May 24 -- Yahoo Sports)

Packers claim Chris Slayton off waivers
The Packers claimed defensive lineman Chris Slayton off waivers Tuesday. The 49ers waived Slayton on Monday to make room for the signing of tight end Tyler Kroft. Slayton joined San Francisco on a futures contract at the end of January. He entered the NFL as a seventh-round selection of the Giants in the 2019 draft. [more]
(May 24 -- Yahoo Sports)

Zach Wilson bulks up, feels like better athlete with more weight on
There will be more of Zach Wilson under center for the Jets this season. Wilson joined Chargers quarterback Justin Herbert as young signal callers who have spent time this offseason bulking up. Wilson weighed 208 pounds as a rookie, but told reporters on Tuesday that he s worked with a nutritionist and chef to add 13 [more]
(May 24 -- Yahoo Sports)