Sunday Update: Still going with a Mayfield stack as primary. Still like Burrow stack and Watson stack, but mixing in a Stafford stack in there as well now, with New Orleans’ top two corners out. I still like Hockenson but he’s picking up a lot of ownership so may go with a Stafford + Kamara + Golladay stack instead and move to Gronkowski at TE, perhaps coming back with Keenan Allen.

Still locking in Baltimore, but if you want to get away from heavy Mike Davis and James Robinson ownership, I like a Henderson + Rams stack.

Well, another week, another game stack winning one million dollars. I’ll keep telling you each week… building your lineup around correlated stacks is the way to put yourself in position for success! We once again saw the QB + WR1 + WR2 + Opposing WR stack lead the way. Yes, it was in a game that scored 69 points, but these concepts work all weeks, even going down to the more common QB + WR1 + Opposing WR stack. We also saw another instance of the RB + DEF stack with Taylor and Indy (a stack we told you use if you were already going to play one or the other individually). 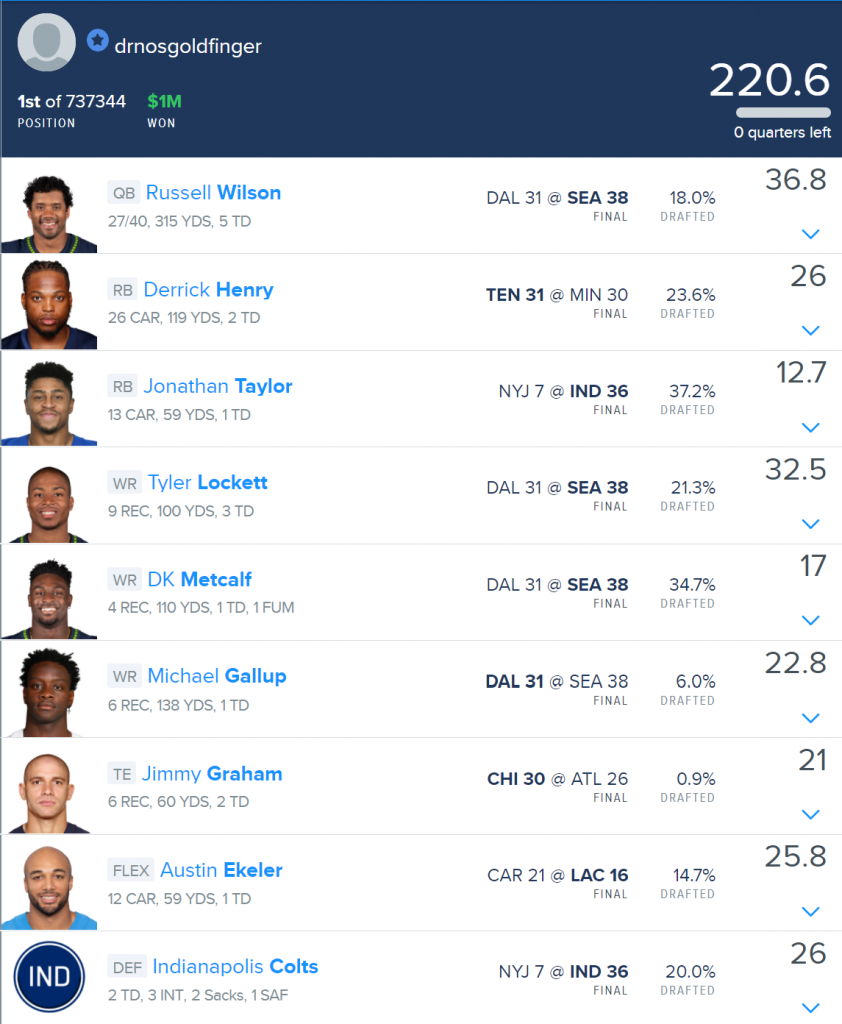 I was largely avoiding the Dallas and Seattle game, simply because of the leverage I would get by fading it had it underwhelmed. It actually started out going the underwhelming route, but we saw the Cowboys, once again, having to pass, pass, pass to catch up. We need to keep an eye on that – that could lead to more of these situations or it could lead to a Cowboys game being more popular than it should be and the game finally underwhelming. This is a good time to remind you of one of my favorite lineup strategies – when you have such a popular game, build two or three lineups… one fading the game, one stacking one side, one stacking the other side. Your main lineup might have been a Steelers or Falcons one like mine was, but hopefully you got some smaller lineups in with a Seahawks stack. If you did that and followed the rest of our picks and analysis, your lineup would have looked awfully close to the one above as I highlighted Gallup, Graham, and even Ekeler (though I didn’t like his price enough to play him).

One more concept on stacking… it’s okay to leave salary on the table. If you’re trying to fill your last roster spot and are choosing between two players who are $500 apart, don’t just blindly take the more expensive player. You need to have a reason (a belief about how the game might go to enable your player to get a big score) for picking any player. Unless you have a really strong preference for the more expensive player, go with a player that fits your lineup correlations – opposing WR for one of your RBs, opposing TE, etc. You have to find a way to have a unique lineup, leaving $1,000 or more of salary unused is a way to achieve that, as others will blindly use up all their salary not considering the individual players.

Okay, on to Week 4 – our first COVID-impacted week.

My initial thoughts as I look at the slate…

Lamar Jackson is expensive, as usual, but coming off a bad loss and playing Washington is a recipe for success. But there is a ton of blowout risk there. I might be more inclined to try a Baltimore RB paired with Baltimore DEF. If you think Lamar still gets enough red zone carries to pay off, could even go with a Lamar + Baltimore DEF stack.

Wilson against Miami gives people no reason to go away from him this week, especially with the banged up RB situation. Similar blowout risk as the Ravens above, but the Seahawks may just keep throwing anyway. Could take a flier on RB and/or Seattle DEF.

Not sure what Josh Allen has to do to get a salary bump. He’s in play every week and seems to be this week too. Allen + Jacobs + Beasley could be an under-the-radar stack.

Kyler could run all over Carolina.

Dak seems too cheap compared to the other top options. Baker seems like an attractive option on the other side.

Watson/Cousins could find themselves in a shootout. As well as Brees/Stafford.

If you really want to go with a contrarian lineup (only if you’re putting multiple lineups into the Sunday Million) could throw in a Dwayne Haskins lineup. Sure, Baltimore is supposed to crush them. They probably will, but what if they don’t. Or what if they do and Haskins has to throw it 50 times trying to catch up?

Now we see why Dak is priced down – Elliott is priced up. Certainly could be a bounce-back spot; great addition to a Baker + WR stack. Baker is cheap enough that you can easily make this work and still fit some nice pieces in around your core.

Kamara and Cook are nice options at the top. Mentioned both those games as potential shootouts making both of these guys solid additions to a game stack.

Carson could actually play this week. It’s risky for sure as he could reinjure knee or he could move to the bench in a blowout. But, if he’s playing, I’m at least throwing in one Carson lineup to offset all the Wilson ownership. Same theory as last week, but with a lot more risk this week.

Kenyan Drake is a really solid bounce-back spot this week against a Carolina team that keeps getting plowed over by RBs. At only $7,000 he may be the most popular RB this week, but sometimes you just have to go with the best play and find a way to differentiate your lineup somewhere else. Mike Davis is pretty popular at $6,300 but I’m not sold on his usage just yet; after all, they weren’t even using McCaffrey in his normal McCaffrey role. Sure, Davis will likely be playing from behind and catching passes, but I’d rather pay up for Drake.

David Johnson is in a good spot to fill out your lineup or use with a Cousins stack.

James Robinson continues to get it done and has a fine matchup. Jags need a bounce-back, but I’m not sure I want to bank on another good game from Robinson at what could be pretty high ownership. He’s awfully cheap though…

Ingram/Dobbins if you want to play RB roulette. Either could be fine or both could be fine. I’m okay with an Ingram + Dobbins + Baltimore D stack.

Cooper at home seems affordable if going with a Prescott stack.

Odell Beckham Jr seems priced right according to his recent performance, but seems way under-priced for his potential. This week is starting to look more and more like a Mayfield + Elliott + OBJ stack for me.

Parker in a game where Miami will surely be trailing could get enough volume to pay off his cheap salary.

Marvin Jones Jr is cheap, especially if Golladay gets the Lattimore blanket.

Boyd at only $6,000 in another game that could be much higher-scoring than we think; his best games come with AJ Green on the field. Note, AJ Green is even cheaper and is getting the volume – this certainly might be the week he cashes in a TD or two and crushes his salary value. A Burrow + Robinson + Green stack starting to look pretty nice. This could even be a Burrow + Robinson + Green + Boyd stack, giving us the same team stack we’ve seen win the million the first three weeks.

Landry fairly priced but cheap if you want to go away from OBJ.

Keelan Cole is off the radar because of a bad game last week, but he’s shown good rapport with Minshew and could be an addition or substitution to a JAC/CIN stack. Would be a nice piece instead of James Robinson if you wanted to put your money on a Robinson regression game.

Andrews is expensive but is a great bounce-back candidate this week.

Waller is useable, especially if you’re going with a Josh Allen stack.

Liked Graham last week, but will be avoiding him this week against Indy.

Logan Thomas is in play if you’re going with a Haskins garbage-time game. Note, this is one of those rare weeks where you can comfortably play a DEF with an opposing player – it’s entirely possible for Baltimore to rack up enough points in the early part of the game to pay off, while still allowing some Washington players to pay off in garbage time. That would also be a unique lineup build.

Sample is a better option than his performance showed last week and could be good addition/substitution to JAC/CIN stack. Or a cheap fill-in piece to the rest of your lineup.

Not a lot that I love so I’ll probably lock Baltimore in wherever I can. Seattle is intriguing at only $4,000. Rams are fine. Chargers recently held Mahomes to 23 points in OT, could capitalize on an aging Tom Brady. Dallas as a flier if you think the normal version of Mayfield shows up. Or Dallas in a lineup or two as a hedge against a Mayfield stack if you go that route.

Pro tip, don’t just make multiple lineups for the sake of having more entries. Be strategic about it. If you’re fading the most popular game in your main lineup, put in a lineup that stacks the most popular game. If you’re stacking a certain team, like in the Cleveland example above, what happens if they tank? Grab a lineup with the opposing defense. If you like a game, but are unsure what side you like most, stack both sides. If you’re making a bunch of lineups, stack that same game a bunch of different ways.

Also, depending on your budget, find a cheap tourney that you can try out a bunch of lineups in. You can put 150 lineups into the Pooch Punt at five cents each. That’s only $7.50! Play around with what types of lineups you like and then pick your favorite one for your main contests. If you have the budget, can do the same thing with the Sunday Million at $4.44 each. Maybe not 150 lineups, but if you want to try out 10 or so to either get coverage of more players or to build a lineup for a few different scenarios you like you can. This is a great way to learn how to build these mini-stacks – you’ll find yourself with three or four lineups you don’t really like, then will suddenly hit on a combination that you like and can use as your main lineup.

So, I provided all the above thoughts as I was doing my initial review of the slate, just going right down the list of players in the order FanDuel has them. Hopefully this gives you a glimpse into how I look through the player list and then how I start identifying a couple stacks I like. As you can tell from above, I’m probably leaning toward a Mayfield + Elliott + OBJ stack. And maybe a secondary lineup with one of those Burrow stacks (Mixon is expected to be popular so a Burrow stack could be a nice way to offset that.) Although, as I build lineups, I’m getting more and more drawn to a Watson + Cook + Cooks stack so that may move above my Burrow stack, although it might be more popular giving me less leverage on the field. Then, since I like to make lineups for other scenarios I like, I’ll throw in some $4.44 entries into the Sunday Million with some of those other stacks I mentioned, something like the Baltimore RBs + DEF stack.